Her Name Is Kseniya Simonova 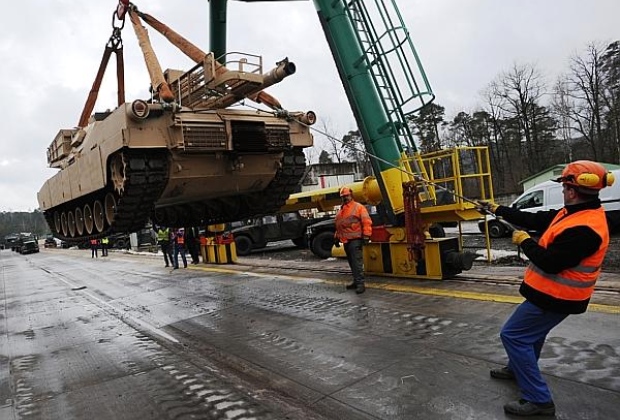 The above image showing an Abrams M-1 battle tank being loaded on to a railcar ready to depart for Wilhelmshaven, then onwards by sea towards South Carolina. This image represents the first time in 69 years when heavy armoured units, divisions, regiments, brigades have not been based on European, and more sensibly; German soil.

Is it any wonder that Putin makes his grab for the eastern side of the Ukraine when he knows that US heavy armour is based some nine-odd thousand miles from the scene of his latest bare-faced theft.

We can discount the British army, along with the Germans, the Dutch, Belgians and of course, the bloody French, Not a single soldier will spring to readiness as the creeping might of the Russian version of the jackboot stomps complacently on the Ukraine borders; the only credible deterrent has mooched off back home under the slack-arsed direction of the Appeaser-in-chief, Hussein himself.

The only people who are getting ready are the people with long memories; the Poles, Estonians, Latvians and Estonians. They remember only too well what the Russians were like when occupying or invading their Nations. N.A.T.O. is supposed to be moving, but all we see so far is all talk and bullshit. Putin knows that he has virtually no opposition. We spent our blood and treasure fruitlessly in Iraq and Afghanistan, we have no more mobile forces, and we have no political leadership with the guts to state ‘so far and no further’ because Putin would hear it for what it is, bluff and failure. Hague talks of diplomacy; of sanctions and visas.

And this is what we have become, a toothless tiger. I sometimes feel as if I should weep for my country!