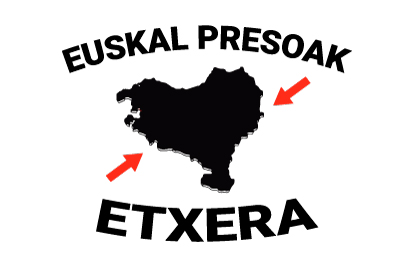 I made a comment to Noel earlier today about attending demonstrations and it got me thinking about a phenomena in the Spanish penal system which is probably not widely known outside the Basque Country muchless wider outside the Iberian peninsula itself. Every year I and a hundred thousand or so others attend a march in January in the Basque Country’s largest city, Bilbao, to protest against the Spanish government policy of dispersión of Basque prisoners: 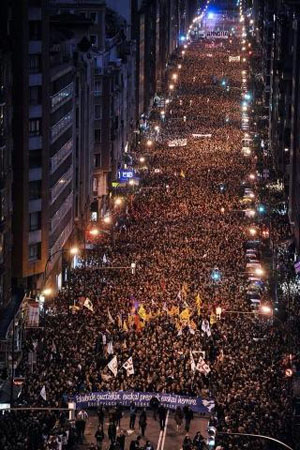 The policy of dispersion means that Basque prisoners are scattered in prisons all over the state and can be moved at any time without notice. Spain is geographically the second largest country in western Europe after France and this policy often means families travelling hundreds of kilometres to see their loved ones for an hour’s visit. These trips incur considerable stress and expense. In one particular incident that I personally know of the sister, wife & young son of a prisoner flew more than 2,300 kilometres from Bilbao to Tenerife just to be told when they arrived at the prison that the prisoner had been moved from Tenerife to Madrid. The photo above is the symbol of the ETXERAT  (home) campaign which lobbies and campaigns to send Basque prisoners closer to their families to prison in the Basque Country:

Note that the campaign doesn’t ask for prisoners to be released or for their sentences to be reduced but to merely return them to  serve the remainder of their sentences in prisons in the Basque Country and alleviate the stresses and pressures felt by family members going on visits. Like most Basque issues this has divided society in the state:

So, ‘terrorists’ reaping what they sow or families being punished for the sins of others?