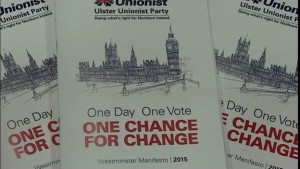 I don’t know about you but as I grow older I find the political manifestos produced at each election time to be utterly ridiculous and of little relevance to anyone beyond the bloated egos of those who produce such garbage. Let’s just consider this;

The Ulster Unionist Party has said tax reductions and extra money for mental health will be part of its price for joining any coalition government. The party will seek VAT rate cuts for property repairs and the hospitality industry. However, it insisted there would be no “begging bowl” approach to negotiations during a hung parliament. Leader Mike Nesbitt said he would be prepared to work with the Conservatives or Labour.

That’s very generous of Mike. I see a few problems though.

There is the pesky issue that he has NO MP’s and is most unlikely to have even 1 MP after May 7th! That poses a bit of a challenge don’t you think?

Then there is the wonderful delusion that EVEN if his Party somehow did get ONE MP the UK Government would change its National policy on VAT to accommodate his wish list! Pure barking nonsense.

The fact is that this “manifesto” like so many others is utterly worthless and the notion that it is a breakthrough document bringing “change” is pure fantasy politics.