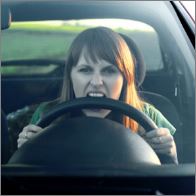 You can always see the people who don’t think about their driving on the motorway. I don’t mean about where they’re going, or where to turn off. I mean about their driving and how it affects others. People who don’t use their mirrors to see what’s behind or beside them, who don’t adjust the pressure on the loud pedal in anticipation of the uphill bit just beginning, and who don’t get up to speed before joining the motorway (this one really winds me up).

Chief among them are the dopey middle lane hoggers. Some of them are plain arrogant, presuming to demonstrate to others how very safe they are by doing 65mph. Listen wallies, it’s not safe at all to trail a mile of frustrated drivers off your rear bumper, all desperate to get past the tosser (that’s you) doing 65mph. Just as bad are those who sit with their chin 6 inches from the steering wheel, completely unaware of the chaos they’re causing all around because they’re not looking, not thinking and oblivious of the empty lane on their left – which you’re supposed to move into when you can! Bah.

Even though middle lane hoggers drive me up the wall, I absolutely disagree with the idea of fining them. It’s a daft idea which will be arbitrarily imposed. The idea of owing the state money for driving badly is insane. Self-policing is the way to do it. It’s perfectly acceptable to flash them, toot them and give them the archer’s salute as you go by. These are the soft social pressures which truly hold society together and keep the dopey in order.

And if that doesn’t work, we should ram them off the road.