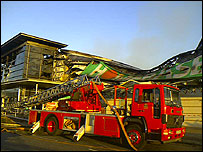 I wonder are there any readers out there who would feel that those Republicans who have firebombed several stores in Belfast today should be elevated to the highest offices of Government? As the major blaze at Boucher Road Retail Park dies down, and people face the prospect of having lost their employment because of these arsonist thugs, is it time to consider inviting the firebombers into the Assembly – with perhaps the Commerce portfolio as a "sweetener" to them?

No – that’s rubbish isn’t it? I mean, who in their right mind, would REWARD the terrorist scum who carried out these bombings, putting life of workers at risk? Well, how about the British and Irish Governments, the Church Leaders, Trade Unions, Big Business, the MSM….and most political parties. After all, these are the same groups who enthuse about permitting those who belong to IRA/Sinn Fein into a devolved Government – and as I recall that organisation carried out THOUSANDS of bombings, and THOUSANDS of murders.

So, the firebombers of Boucher Road and the mass murderers of the IRA have much heritage in common. And yet, we are reliably informed that unless we dialogue and reward terrorists, we will only get more terrorism. Do you agree?

25 thoughts on “FIT FOR GOVERNMENT?”