and there I am, next to Buddy with the beer!

To begin, allow me to pass some names before your minds. names of battle honours awarded to the famed and famousBritish Regimental names, illustrious for the places where British soldiers and sailors fought the enemies of the Crown, and; in most cases, prevailed. St Lucia 1778, Egmont-op-Zee, Copenhagen, Douro, Talavera, Albuhera Nivelle, Inkerman, Sevastopol, Kandahar 1880, Afghanistan 1879 -80,Egypt 1882 Tofrek, Suakin 1885, South Africa 1899-1902.

The names of Regiments famed for over six centuries, all of which began from the Fraternity or Guild of Artillery of Longbows, Crossbows and Handgonnes; latterly transformed into the Honourable Artillery company, the oldest regiment in continuous service in the British Army, reel off before your minds eye. The Coldstream Guards, the Irish Guards, the Scots & Welsh Guards; the list of Regimental names, and the Battle honours they fought, won and died for, dazzle the very eye which perceives them. Our history is military, our very Nation was formed in the blood spilled in the dark ages after the Romans left, their own Empire crumbling. We have seen a conqueror come in 1066, but none after that, although many tried. 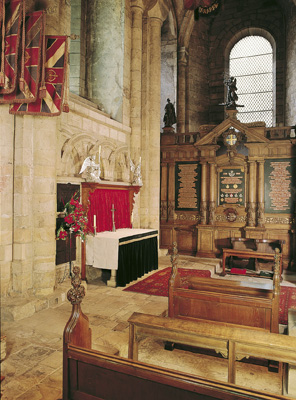 In the photo, the faded flags set high on the framed wall of the Durham Light Infantry chapel, set within the majestic stones of Durham Cathedral, are held with the mental concrete of martial memory. We revere our dead, we honour those who survived, and the colours reflect that honour.

Will there be honour; will there be flags; for Camp Bastion, for the wounded who survived the roadside bombs whilst being transported in unarmoured Land Rovers and mobile Coffins? Will there be Drumhead Services for the British Army of 2014, as we scuttle away from the place where the very flower of our generation were sacrificed to allay the political pretensions of f***king politicians, one of whom uttered those infamous words “ “We would be perfectly happy to leave in three years and without firing one shot because our job is to protect the reconstruction.” By 2008, 4 million bullets had been fired by the British armed forces; and Four hundred & fifty-three men and women, wearing the uniforms and badges of Her Majesty; lay dead!