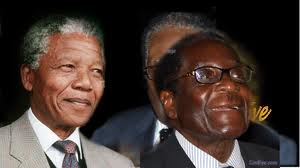 “Zimbabweans are voting in a presidential election that has already been hit by allegations of fraud. On Tuesday, incumbent Robert Mugabe said he would resign after 33 years in power if he lost. It came as Prime Minister Morgan Tsvangirai’s Movement for Democratic Change (MDC) accused Mr Mugabe’s Zanu-PF of doctoring the electoral roll. Zanu-PF denied the accusation.”

Under the stony gaze of marxist thug Mugabe, Zimbabwe (pictured here with his good friend, Mandela)  has turned into a shambles of an economy, with a currency that is worthless, with abject poverty for many people, with murder rates that are astronomical and with a “democracy” that is a sham, controlled by Zanu-PF.

Once upon a time, when BRITAIN ran this country, it was renowned as the bread basket of Africa, such was the economic success of the country. Giving it independence, has transformed it from breadbasket to basket case.

26 thoughts on “FROM BREAD BASKET TO BASKET CASE…”