THE WAR ON LANGUAGE… 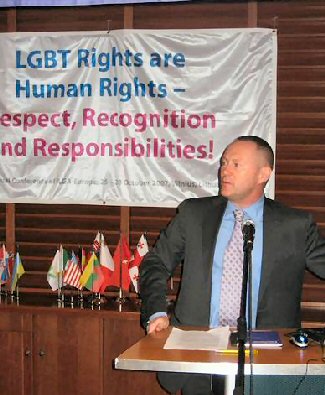 What could be more normal than for a child to be brought up with two mums or two dads?

Gay couples in NI are denied the chance to adopt children because of outdated legislation, the High Court has heard. The Human Rights Commission oppose a bid to delay a legal challenge with potential significance for unmarried and civil partnership couples. Judicial review proceedings have been brought in an attempt to introduce new laws to bring NI into line with the rest of the UK.The commission claims the current arrangements here are discriminatory. It is backed in its case by a lesbian woman who wants her partner to be allowed to adopt her biological son.

I am not in the LEAST surprised that this challenge is backed by the NI Human Rights Commission. After all, it’s new Chairman, Father Michael O’Flaherty has form on this;

“A vocal advocate of gay rights, Professor O’Flaherty was central to the creation of the ‘Yogyakarta Principles’, a document which sets out sweeping and detailed recommendations about advancing homosexual and transsexual rights. Among its many recommendations is the introduction of gay adoption, the right of prisoners to have “gender-reassignment treatments”, the use of schools to ensure that children are educated to have “understanding of and respect for…diverse sexual orientations and gender identities”, positive discrimination to favour gay individuals and the suggestion that freedom of expression may have to be limited to protect gay rights.”

Got that? With O’Flaherty now in position, we can expect to see the entire Gay Rights agenda remorselessly advanced, care of the taxpayer. The fabric of our society will continue to be warped out of all perpsective – so, no real change then.