This gave me a giggle.

Just a day after Tesco was criticised for selling a ‘Psycho Ward’ costume, an ‘inflatable gay best friend’ has been discovered in its online store, with the word gay asterisked out. Twitter users have reacted with fury at the censorship, questioning why the word has been deemed offensive. The description for the product reads: ‘Although not much can be said for his own attire, your Inflatable g*y Best Friend is ready to give you fashion advice, tell you if your bum looks big and b**ch about everyone who doesn’t wear Jimmy Choo’s.’ 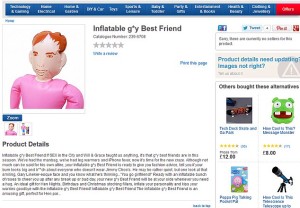 The issue is not the selling of an inflatable gay best friend..no, that is obviously normal, if not quite de rigeur, but rather the fact that Tesco asterisked the word GAY to G*Y! How very dare they! What a world we live in.