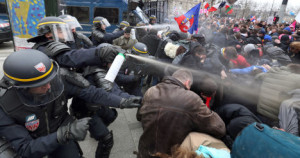 I noticed that this huge demonstration in Paris against gay marriage went without much coverage in the UK!

“Paris riot police fought back crowds who pushed their way onto Paris’ landmark Champs-Elysees avenue today as part of a huge protest against a draft law allowing same-sex couples to marry and adopt children. Up to 300,000 people – conservative activists, children, retirees, priests – converged on the capital in a last-ditch bid to stop the bill, many bussed in from the French provinces. The lower house of France’s parliament approved the ‘marriage for everyone’ bill last month with a large majority, and it’s facing a vote in the Senate next month.

The Socialists are ramming this legislation through and to hell with what the people think.

“In an indication of the sensitivity of the issue, protesters had been barred from marching on the Champs.  Christine Boutin, leader of the French Christian Democratic Party, was pictured lying on the ground in the Champs-Elysees, after being teargased by police during the demonstration.  Last year she said that she remained strongly opposed to same-sex marriage and claimed that it would lead to polygamy…” 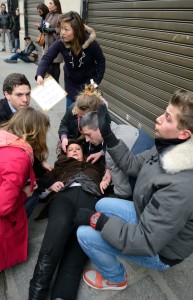