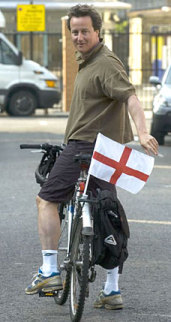 I see that David Cameron, the simpering liberal PR crazy half-wit who leads the dysfunctional Conservative Party, has been outlining policy on crime. He believes that "long-term generational change" is needed to fight crime – not a "knee-jerk" response. Policies to curb violent video games, encourage responsible parenting, and improve schooling could be considered by the Tories, Cameron said.

Wow – tough words, eh? I love the "could" in his awesome strategy. Any weaker and it would be invisible.

Look, OF COURSE encouraging responsible parenting is a good idea. But how is "Call me Dave" going to achieve this unless he is prepared to eviscerate the rotten Welfare system and that means penalising the dysfunctional parasites thet feed off it. Think he would do that – in a million years? And as for violent video games – I agree they are a problem but will he ban them? What about violent movies and crime eulogising pop video’s? Ban them too?

The way to deal with crime is not "long-term" but RIGHT NOW. Today, not tomorrow.

The Police FORCES across the UK should start acting as if they were serious about enforcing the rule of law and arresting the hoods that blight our streets. Croxteth is but one instance of what happens when the police back off from law enforcement and instead try to act as glorified social workers. The political and policing will that is missing needs firmly re-inserted and that means getting rid of the liberals that infest the senior strata of policing in the UK. The guilty need severely punished and the judiciary need to act more responsibly. In short we need to tackle crime head-on, and all this clap-trap about generational change is a distraction from that TOUGH reality of today, of this generation. If Cameron had any sense, which he doesn’t, he would recognise that being tough on crime comes before being tough on the causes of crime. That time is now.