WHY THE EURO IS IN TROUBLE….

EUROPE SAYS NO TO REALITY!

GREECE IS THE WORD….

THE NEXT EUROPEAN WAR?

WHY SPAIN WILL LEAVE THE EUROZONE…

EUROZONE ON THE DIP! 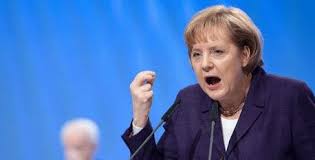 I know, it’s not the sort of title one wants to read given not so distant history. But relax, it’s not THAT kind of war, not yet.

Andreas Vosskuhle, head of the German constitutional court, said politicians do not have the legal authority to sign away the birthright of the German people without their explicit consent.

“The sovereignty of the German state is inviolate and anchored in perpetuity by basic law. It may not be abandoned by the legislature (even with its powers to amend the constitution),” he said. “There is little leeway left for giving up core powers to the EU. If one wants to go beyond this limit – which might be politically legitimate and desirable – then Germany must give itself a new constitution. A referendum would be necessary. This cannot be done without the people,” he told newspaper Frankfurter Allgemeine.

The extraordinary interview comes just days before the Bundestag votes on a bill to revamp the EU’s €440bn bail-out fund (EFSF), enabling it to purchase EMU bonds pre-emptively and recapitalise banks.

But the €440bn is not enough. €2 TRILLION is what they say will be required. The €440bn is chickenfeed. This is getting surreal. They may re-arrange the deck-chairs but their ship is going ONE way….

7 thoughts on “GERMANY AT WAR!”