Faux outrage from a PR crazed politician, don’t it make you sick? 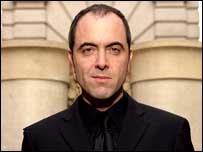 He’s never been to Vietnam, but his comments on the County Antrim town of Larne have left actor James Nesbitt with a little local difficulty. It started while he was on the BBC programme Something For The Weekend. After reminiscing about how spending some of his youth in a loyalist marching band had helped him bond with his father he took part in a cooking segment on the show. While helping prepare a Vietnamese dish he was asked if he had ever visited the Asian country, the Jekyll star said that he hadn’t – but that he had visited Larne which, in his view, was much the same.  Cue local outrage in the town, with the area’s DUP MP Sammy Wilson hitting out at the Northern Ireland born actor.

"He is one of many people who leave Northern Ireland, make good and then find that the only thing they can do is denigrate the country they came from."

RUBBISH. It was a light-hearted throwaway comment and Sammy Wilson needs to get a life. I like Jimmy Nesbitt, he’s excellent in the Jekyll series currently on TV. People will get more pleasure out of watching Nesbitt than listening to the drivel from Sammy Wilson.