Hats off the to the chicks today.

Jessica Ennis has bagged Gold tonight in the Heptathlon after Kat Copeland and Sophie Hosking came up trumps this morning in the rowing. Sandwiched in between was something astonishing in the cycling velodrome, where the Women’s pursuit team won Gold. How good were the girls? This good: In their last six pursuit races they’ve broken the World Record six times. They’re so good that they’re not just bagging Gold, they’re choosing to break the World Record on the way. Truly these are great days among great days for British cycling fans.

So it’s well done to Dani King on the left (below), Laura Trott on the right and, in the middle, Joanna Rowsell who must be the coolest athlete at the Games. 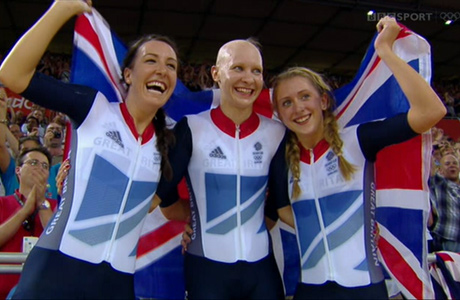 Why? Well I’m no young lady, so I can only imagine how tough it must be for the 23 year old Rowsell to deal with losing her hair to alopecia. The temptation to mask it must be incredible, but she chooses not to. It’s a statement that says: “this is me, this is how I look, so be it”, and you don’t get cooler than that.