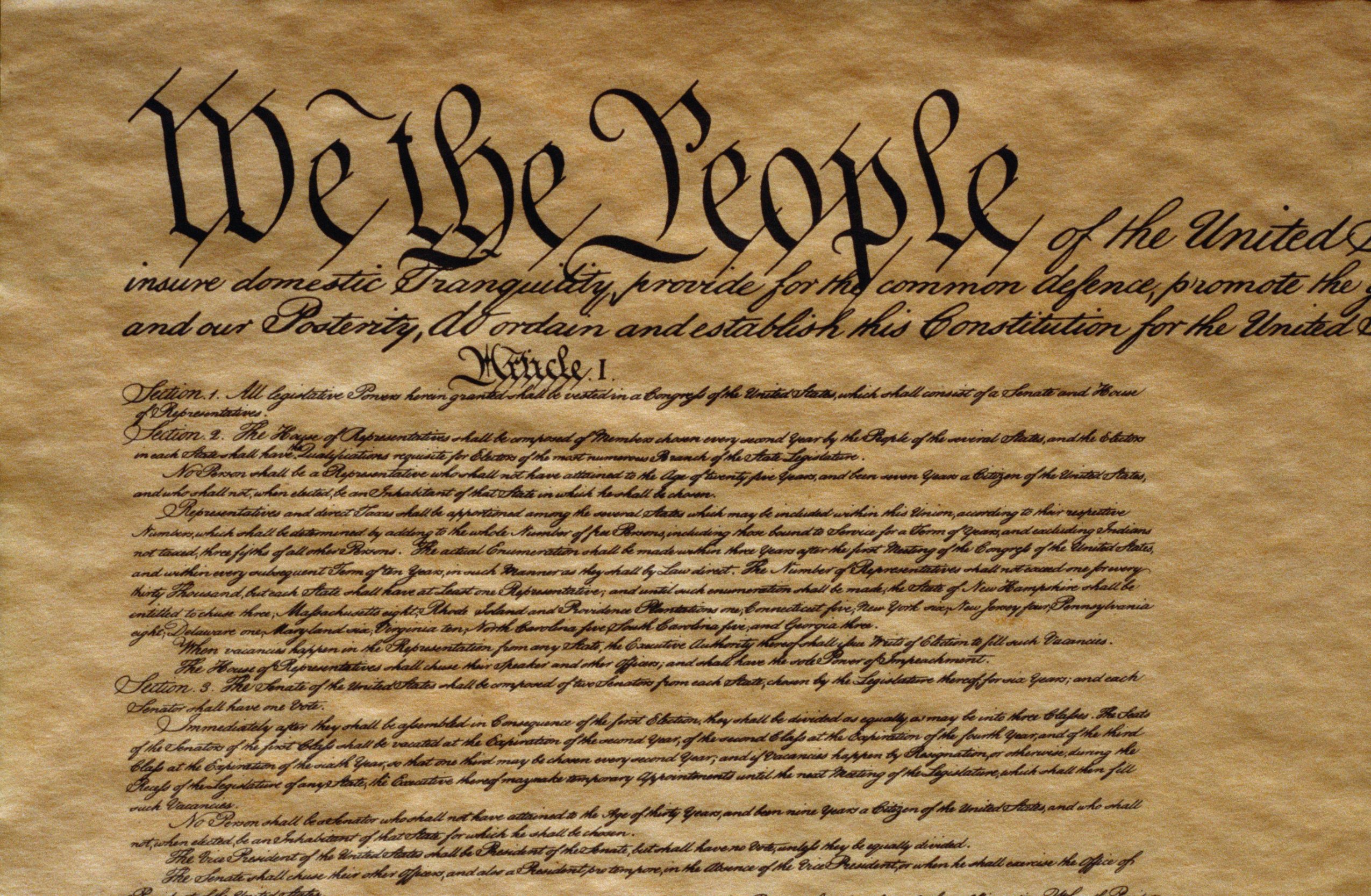 The Democrats have put forth a Bill to “Fix” the Supreme Court of the United States.

Now there are many of us on all sides that believe there is Much that is wrong with the Supreme Court. My own Personal grievance starts with Marbury v. Madison, 5 U.S. 137, was a landmark U.S. Supreme Court case that established the principle of judicial review in the United States, meaning that American courts have the power to strike down laws and statutes that they find to violate the Constitution of the United States. and only goes on from there.

The Original Intent in the Constitution is as follows:

The judicial power of the United States, shall be vested in one Supreme Court, and in such inferior courts as the Congress may from time to time ordain and establish. The judges, both of the supreme and inferior courts, shall hold their offices during good behaviour, and shall, at stated times, receive for their services, a compensation, which shall not be diminished during their continuance in office.

The judicial power shall extend to all cases, in law and equity, arising under this Constitution, the laws of the United States, and treaties made, or which shall be made, under their authority;–to all cases affecting ambassadors, other public ministers and consuls;–to all cases of admiralty and maritime jurisdiction;–to controversies to which the United States shall be a party;–to controversies between two or more states;–between a state and citizens of another state;–between citizens of different states;–between citizens of the same state claiming lands under grants of different states, and between a state, or the citizens thereof, and foreign states, citizens or subjects.

The trial of all crimes, except in cases of impeachment, shall be by jury; and such trial shall be held in the state where the said crimes shall have been committed; but when not committed within any state, the trial shall be at such place or places as the Congress may by law have directed.

Treason against the United States, shall consist only in levying war against them, or in adhering to their enemies, giving them aid and comfort. No person shall be convicted of treason unless on the testimony of two witnesses to the same overt act, or on confession in open court.

The Congress shall have power to declare the punishment of treason, but no attainder of treason shall work corruption of blood, or forfeiture except during the life of the person attainted.

The Judiciary Act of 1789 gave the Supreme Court original jurisdiction to issue writs of mandamus (legal orders compelling government officials to act in accordance with the law).

That is the historical basis for one of the 3 EQUAL Branches of the American Government. The branch that is supposed to by design keep the other two Branches in line, guaranteeing they Follow the Law starting with the Constitution. A true Non-Political Branch to ensure the Equality of Law, and that No Laws, and, or Government Actions violate the Boundaries set forth in the Constitution.

The Courts as a whole have long strayed from their Original Intent, the Supreme Court except for MvM though has held pretty fast to Original Intent. Yes they have made some very Horrible decisions in it’s 246yrs of existence. That is to be expected, they are only human, and therefore flawed, but for their entire History they were the Brakes applied to both the other Branches.

Now however one Party that has had a consistent record of abusing the American people in the name of helping them has decided that the Courts latest Rulings justify Dismantling one Branch of our Government to create a new one with the Courts name.

The Democrats have a “New Plan” here is the Press Release:

WASHINGTON, D.C. – In an effort to restore legitimacy and independence to the nation’s highest court, today Congressman Hank Johnson (GA-04) introduced the Supreme Court Tenure Establishment and Retirement Modernization (TERM) Act, which would establish term limits for Supreme Court justices while preserving constitutional protections for judicial independence in decision making. Under the TERM Act, a new justice would take the bench every two years and spend 18 years in active service.

Sen. Sheldon Whitehouse (RI) is introducing the legislation in the U.S. Senate.

“This Supreme Court is increasingly facing a legitimacy crisis,” said Rep. Johnson, Chairman of the Judiciary Subcommittee on Courts, Intellectual Property and the Internet. “Five of the six conservative justices on the bench were appointed by presidents who lost the popular vote, and they are now racing to impose their out-of-touch agenda on the American people, who do not want it.  Term limits are a necessary step toward restoring balance to this radical, unrestrained majority on the court. I am pleased to have the support of Judiciary Committee Chairman Nadler, and Subcommittee Chairs Cicilline, Cohen, and Jackson Lee, and Rep. Bass, along with Rep. Khanna, who has been a champion of this issue.”

“With all the harmful and out-of-touch rulings from the Supreme Court this last year, legislation creating 18-year terms for justices is essential,” said Chairman Jerrold Nadler.  “Otherwise, we will be left with backwards-looking majority for a generation or more.  Instead, under this bill, each President would be entitled to appoint two justices.  We would begin to see a Court that better represents this nation and that better reflects the public whose rights it is responsible for protecting.”

“Instituting term limits for Supreme Court Justices will help rebalance the bench and restore the public’s trust in our nation’s highest court.,” said Rep. David Cicilline, chairman of the Judiciary Subcommittee on Antitrust, Commercial and Administrative Law. “We must address the crisis currently facing the Court in terms of its legitimacy and the public’s confidence in it. This legislation is an important step to restoring the Court’s important role in our constitutional system.”

The Supreme Court TERM Act would:

•          Establish terms of 18 years in regular active service for Supreme Court justices, after which justices who retain the office will assume senior status;

•          Require current justices to assume senior status in order of length of service on the Court as regularly appointed justices receive their commissions;

•          Preserve life tenure by ensuring that senior justices retired from regular active service continue to hold the office of Supreme Court justice, including official duties and compensation; and

•          Require the Supreme Court justice who most recently assumed senior status to fill in on the Court if the number of justices in regular active service falls below nine.

America is alone among modern constitutional democracies in allowing its high-court justices to serve for decades without term or age limits, resulting in some Presidents appointing no justices and others appointing as much as a third of the Court.  Regularizing appointments every two years will ensure a Supreme Court that is more representative of the nation, reflecting the choices of recently elected Presidents and Senators. Term limits for Supreme Court justices are an essential tool to restoring a constitutional balance to the three branches of the federal government.

The Supreme Court TERM Act would build on the existing retirement system for Article III judges, which the Court has repeatedly upheld as constitutional.  The bill would also preserve judicial independence by ensuring that Supreme Court justices who assume senior status remain fully compensated members of the federal judiciary for life, capable of exercising official duties on and off the bench for as long as they choose.

As Chairman of the Judiciary Subcommittee on Courts, Intellectual Property and the Internet, Rep. Johnson has worked tirelessly to address the ongoing crisis of confidence Americans have in the Judiciary.

WHAT THEY ARE SAYING

Fix the Court executive director Gabe Roth said: “The Supreme Court has been too powerful for decades, deciding who wins elections, who can vote and get health care and even who lives and dies. Rep. Johnson’s TERM Act would be a potent antidote. It would end the all-too-common, and patently undemocratic, three-decades-plus reigns of today’s justices and give the people a more direct say in who serves on the high court via biennial appointments. It’d also end the macabre conceit where American law depends on the health of a few 70- and 80-somethings. Three-fourths of Americans support ending SCOTUS life tenure, and this bill does that in a smart, fair way. I am pleased to lend my support.”

“Public confidence in the Supreme Court is at the lowest level since polling began 50 years ago,” said Noah Bookbinder, President of Citizens for Responsibility and Ethics in Washington (CREW). “For an institution whose credibility is its currency, this is a historic crisis. By requiring that justices serve in staggered 18-year terms, the Supreme Court Tenure Establishment and Retirement Modernization Act would ensure that the Court more closely resembles the country it serves and curtail justices’ ability to time their retirements in order to ensure that someone with a similar political ideology succeeds them on the bench. This structural reform, which has been endorsed by liberal and conservative legal scholars across the ideological spectrum, is necessary to respond to the magnitude of the current crisis. We call on Congress to pass it as expeditiously as possible.”

Now we break this down into what it really means, and who it empowers, and the outrageous gall of it.

Everyone of them has spent the majority of their lives as Politicians. Entrenched men and women who have made vast fortunes supposedly representing the people of their state and districts. These are the People demanding TERM LIMITS on Judges. The least corrupt Branch of our Federal Government. They want to force out the one Branch of Government that they do not control while replacing it with an unelected Super Government where the People have no say.

The United States Supreme Court since Marbury v Maddison has been the Final Say over what is and what is not Constitutional. By appointing a New Supreme Court Judge every 2 years they turn the Court into a political body comprised of Ideologues rather than a Court to uphold the Integrity of the Constitution and our society. Creating nothing but a Rubber Stamp for the current Political Trends based solely on Emotion Rather than The Law, let alone the Constitution. That old rag will mean nothing.

These Judges will still serve and get paid for life, they will only have to not be a primary sitting at the Bench after their 18 years. Plus the court will reach a MINIMUM of 18 Judges seated at one time in perpetuity.

The Congress has a habit of passing things that they know that the people do not want, and would never vote for with the sole purpose of the Law being sued. Where it will wind up in a Court where a Judge will rule based on their ideology rather than the Constitution codifying a Law that the people are against, but that our elite rulers want.

This Bill by the Democrats is the Framework for Tyranny. It completely nullifies the Constitution and creates a Branch of Government that makes Laws who are Unelected and can never be Removed.