Well done to Chris Froome, who’s just won the greatest sport event on the planet and elevated himself into the pantheon of sporting greats. I dunno, they’re like buses these fellas. You wait 99 years for a British winner of the Tour de France and tonight, as the 100th Tour ends, we have two on the trot.  However, you don’t win the Tour on your own. It’s a team event, and winners emerge because of their mates. The Tasmanian Richie Porte is a cycling hero. He’s flogged himself silly over 2500 miles and three weeks to drag Froome forward again and again, up mountain after mountain. Froome will get the headlines but Porte is just as much a cycling superstar. Here are the two boys – 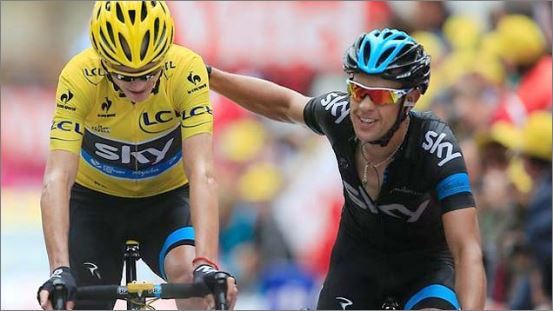 Well done also the their teammate Geraint Thomas who rode almost three weeks with a broken pelvis, and also to the German champion Tony Martin who crashed on the first day. Having the skin ripped from his back, concussion and contusions on his lungs didn’t stop him from finishing either. I’ve always loved my cycling. In part it’s because as skinny as they are, it’s a hard man’s sport. In the end I might have chosen something easier in being a rugby hooker. Chapeau to them all.

And we stuffed the Aussies at Lords too. Great days.