All so contrived. This is what the Irish Times says…

The mother (R) of Palestinian Ateya Abu Moussa, who has been held prisoner by Israel for 20 years, reacts as she is hugged by her sister after hearing news on the possible release of her son. Abu Moussa was expected to be among more than 100 Arab prisoners to be released as a step to renew stalled peace talks with the Palestinians in Washington today. 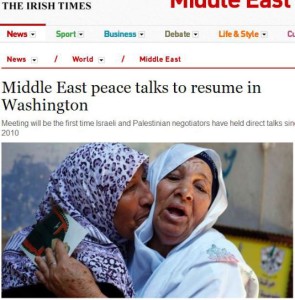 It doesn’t say why Moussa was in prison. So let me tell you

Ateya Abu Moussa, as we noted in our post, was convicted of murdering holocaust survivor  Isaac Rotenberg with an axe in 1994. The terrorist attack on Rotenberg was carried out by Abu Moussa and an accomplice as a precondition (an initiations of sorts) of their entry into a terrorist organization.