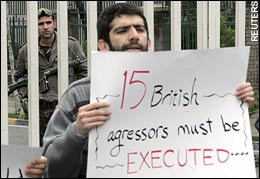 Wondered what your thoughts are on the calls from "students" in downtown Teheran for the execution of the kidnapped British sailors? I notice Amnesty rremains mute on the matter, that the UN has put out a watered-down statement and that the EU has done nothing. So, even at a time when a rogue regime kidnaps and humiliates our sailors, the "international community" watches with seeming impassivity.

But not QUITE impassively. I suspect that in many hearts, the executions called for by Ahmadinejads trained stooges, would be quietly welcomed. Just as 9/11 was welcomed. Can you imagine what the outcry would be if Israel kidnapped 15 Iranians, and that demo’s were held by "students" in Jerusalem demanding their execution? Why the BBC would go into overdrive with analysts falling over each other to denounce the Zionist entity. Just as they denounce the Bush administration. But when it comes to the 12th Imam’s Dining companion, why all is silence. They watch on and hope….