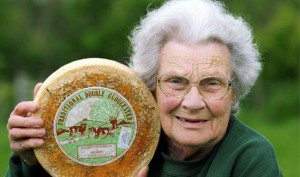 Yes, British policing priorities have changed in recent years. So, for example, it took 20 minutes for the police to turn at the scene of the Jihad butchery in London. But elsewhere, they can still be like greased lightning when they see imminent danger…..

Diana Smart, 86, has been making the 1ft diameter cheese “wheels” for 25 years for contestants to chase down 200-yard Cooper’s Hill near Brockworth, Glos. But she was stunned when three officers arrived at her farm in nearby Churcham to warn her she could be held liable for any injuries. Diana, who accused the officers of being “heavy-handed” and “threatening”, has now pulled out of the event on Bank Holiday Monday for fear of getting into trouble. She said: “It’s crackers. The police came round and warned me not to give the event some cheese. I like doing it, it’s always brought me such joy and a smile. The police were so heavy-handed. “They threatened me, saying I would be wholly responsible if anyone got injured. They said it could cost us an enormous amount in damages.