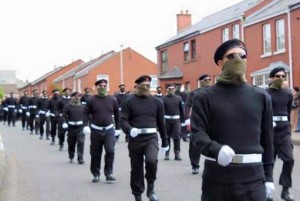 This overt display of Irish Republican terrorism appears to have been overlooked by the PSNI since it is in breach of the law.

“Peggy O’Hara was the mother of Irish National Liberation Army hunger striker Patsy O’Hara. He died in 1981 after 61 days while serving an eight-year sentence for possession of a hand grenade.

In Derry on Saturday, 45 men and women clad in black paramilitary uniforms followed Mrs O’Hara’s horse-drawn hearse to St Columba’s Church in the Long Tower for a requiem Mass before burial at the City Cemetery, just over a mile away.

The masked paramilitaries accompanied Mrs O’Hara’s remains from her Templegrove home, off the Buncrana Road.

Now then, I am told this grotesquerie was the “Last Wish” of Mrs O’Hara. I can respect that, she was entitled to an opinion. But it is unlawful and all involved should be brought before the Courts. The fact the PSNI refuse to do anything about this shows just how traduced the rule of law has been in order to accommodate the farcical “peace process”
Were any such display to be indulged in by any loyalist terror group, I would again call for all to be arrested.
But in a country where the WORST terrorist gang of all now sits in power at Stormont, I suppose continued looking the other way is de rigour. Here is the full video of this flagrant display of terror worship.
Click to rate this post!
[Total: 0 Average: 0]
ATW

17 thoughts on “HATRED ON PARADE”