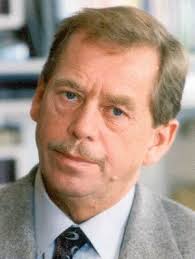 Sorry to read of the death of Vaclav Havel, the Czech Republic’s first president after the Velvet Revolution against communist rule, at the age of 75.

Havel was that rare species, a conviction politician. To my mind, that is the only sort that matters. He was also a man who could constrict some memorable insights in to the human condition;

“The tragedy of modern man is not that he knows less and less about the meaning of his own life, but that it bothers him less and less.”

“Anyone who takes himself too seriously always runs the risk of looking ridiculous; anyone who can consistently laugh at himself does not.”

Margaret Thatcher saw the greatness in Havel and he was a man who played a pivotal role in helping his people regain their Independence. Sadly, it looks like the Czechs threw off one form of serf subjugation to replace it by another of the EU variant.