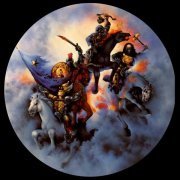 It appears that the Mayor of London, Boris Johnson, believes the end times are nigh and the four horsemen of the apocalypse may soon be spotted over our capital city.

“Floods, heatwaves and drought could cause a
virtual collapse of the capital unless action is taken to address
climate change, Boris Johnson warned today. Launching London’s Climate Change Adaptation Strategy, the Mayor said global warming would affect all Londoners.”For
London, scientists currently forecast warmer, wetter winters and hotter
drier summers, coupled with an increase in the frequency of extreme
weather and rising sea levels,” he said. The report estimates
1.25million people would be affected by a major flood. It goes on to
suggest ways to tackle climate change and mitigate its effects.”

Boris is having a laugh. He plays to the eco-wacko audience without having a clue how London is going to manage to alter complex planetary climatic change. London will last a lot longer than Boris and the snake oil global warming salesmen whose agenda he so foolishly propagandises.

9 thoughts on “HORSEMEN SPOTTED OVER LONDON…”