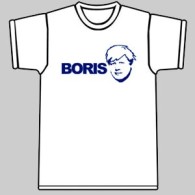 Red Ken made it in as Mayor of London in 2004 on the back of the most complicated voting system ever, a crap turnout (35%) and half a million spoiled ballot papers. A slightly less shambolic election campaign than 2000.

Looks like Boris, everyones favourite Tory and loveable toff, is going to take him on. Hurrah! Another eccentric – but one who on the face of it, isnt quite so self important. "Behind the endearingly dishevelled and distracted exterior lurks both a formidable intelligence and a genuine desire to do good"

Boris’ declaration in today’s Evening Standard, which had a mountain of coverage already…

I have a stock speech in which I berate the British – and especially British politicians – for being altogether too namby-pamby, mollycoddled and risk-averse; and I think of that speech now as I contemplate the challenge of running for Mayor of London.

If I win the Tory nomination, I will be facing one of the wiliest and most enduring politicians of the modern age, a man who – whatever you think of his measures – has certainly been effective in accomplishing at least some of his own objectives.

I will be running against the strong advice of those who say I would be better off writing books, and going on television, and that I risk throwing away what remains of my political career; and though there have been literally hundreds of people who have urged me to run, I have found myself brooding – like all paranoid politicians – on the negative voices, the people who say that the great King Newt is too dug in, that his positions are impregnable, his machine too vast and well-oiled.

And having weighed up their warnings, over the last week, I say phooey…