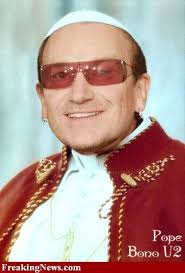 Poor Bono. His feelings have been hurt!

“U2 SINGER Bono says he was “stung” and “hurt” by criticism of the band moving part of its business to the Netherlands to lessen its tax burden. In an interview in The Ticket today, he speaks about the band’s 2006 decision to move part of its business out of Ireland following the Government’s decision to put a cap on the amount of tax-free earnings available to artists. U2’s move was criticised by politicians and some development groups. “We pay millions and millions of dollars in tax. The thing that stung us [about the criticism] was the accusation of hypocrisy for my work as an activist…”

So, I hope all of you who may have entertained the notion that Bono was just one more hypocritical rock star are now sorry.