DANCE, DANCE WHEREVER YOU MAY BE….

Another Cut an Paste

and then they move them…..again!

On a clear day; you can still see the smoke

Gone, but not forgotten!

I write in Joanne’s memory, and of the balance  on the debit side of the immortal ledger which has only partly been balanced in vengeance, in advance of any posts reminding us of the truly savage attacks on that stupendously clear and sunny morning. I would attempt to comment upon our own home-grown and truly asinine response to the disaster which befell the whole of America on that September morning.

I am not referring to the truly disgusting edition of Question Time, where the hard-Left-slanted audience nearly succeeded in bringing the former American Ambassador to tears as he strove to defend his country against a gaggle of fools; an attack which revealed the true stance of the BBC in terms of political neutrality. I am not writing of the avalanche of anti-American propaganda which has flowed from the mouths and keyboards of the chatterati of the Liberals and the Labour Party. 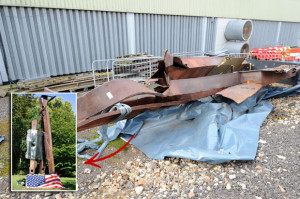 Instead I am pointing to the singular disrespect offered by all strata of officialdom in this Country and in our Capital City, which was once rescued from near starvation and defeat by the generosity of an America which simply thought that, although they didn’t want War, also reckoned that their kinfolk were in trouble, and decided to lend a hand. I am of course referring to the apathy and neglect given a small slice of American history, namely the girder steelwork taken from the piled-high rubble which lay over and around the remains of 2,996 casualties of one man’s hatred, envy and spite. We couldn’t even give that small sculpture the dignified site it so richly deserved, instead allowing it to rust away in a farm scrapheap!