The state of Virginia has elected a Full Democrat Majority into it’s Legislator along with a Democrat Governor. Being good Democrats the first thing they did was attack Law Abiding Gun Owners.  The problem they now face is a real one. Where the Dems definitely have the votes they don’t control the state.

This is the Political Map 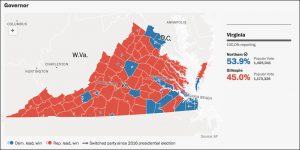 The Blue areas are controlled by Democrats the Red by Republicans and a very heavy percentage are gun owners. The gun owners are upset at the State Government for attempting to remove their 2nd Amendment Right. Almost every County Government in the State has declared itself a 2nd Amendment Sanctuary. In a middle finger to the Nations Cities that have declared themselves Sanctuary’s from Federal Immigration Laws these Counties have declared themselves Sanctuary’s from State Gun Laws. 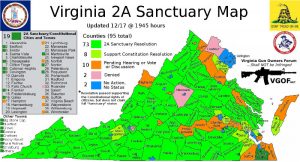 Now today there is a protest against the State Government. Governor Northrop has declared a State of Emergency. He’s screaming NeoNazi Gun Nuts are coming to kill everyone. He’s Canceled State Open Carry Laws by fiat, he’s called in military units to supplement the Capital Police, there are even snipers on the roofs……

Here is an attendee.

An attendee at the rally in Richmond Virginia dispels the media smears against rally-goers.

He says the media is mischaracterizing them, & that they are just law abiding citizens who want to advocate for their constitutional rights.#VirginiaRally
pic.twitter.com/Vp3bJX8eNi

121 thoughts on “In Virginia’s Capital there’s a Rally”