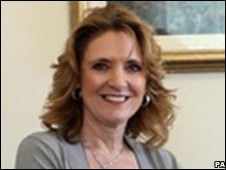 Iris Robinson, the Democratic Unionist MP for Strangford and a member of the Stormont Assembly, announced she is withdrawing from public life. She told the Press Association on Monday that she had severe depression.

Fair enough. If she is so unwell I am sorry to hear it, but she should immediately step down and let the people of the constituency speak as to who THEY want to represent him. A depressed MP is a liability and must do the decent thing and resign. So long as she collects salary and expenses she has a job to do and if this proves impossible for health reasons, then surely a by-election must be called?

We have seen the House of Paisley crumble, is this the beginning of the end of the Swish Family Robinson? One Robinson down – one to go.

39 thoughts on “IRIS – AN ENDANGERED SPECIES…”