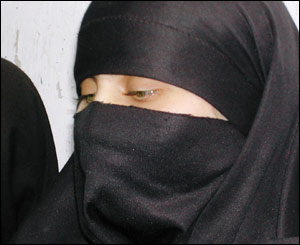 Here’s a strange story. Muslim women who wear the hijab are at risk of serious illness because they do not get enough sun, doctors have warned. They said an alarming number of women who cover their skin are suffering bone deficiencies over a lack of vitamin D. Most of the body’s vitamin D – which prevents rickets – is obtained through sunlight acting on the skin. Only a little comes from food. Doctors told a London conference today that people with dark pigment are at risk because of "cultural reasons" and because they are less efficient at producing the vitamin. The bone disorder rickets has now broken out in young Muslim children as babies are not getting enough calcium from mothers’ breast milk.

But here’s a response to this from someone who claims to be "a Muslim female health professional who works for the NHS and pays a lot of taxes let me get some things straight with you.

1. Hijaab (modesty) is a religious requirement
2. Muslim women in other countries do not encounter this problem
3. Treating Vit D deficiency is not expensive at all
4. Muslim women work, pay taxes and contribute towards the NHS
5. My taxes also pay for treating smoking/drinking related illnesses. As a Muslim who does not drink or smoke I could moan about my taxes paying to treat such problems – but I have more sense and intelligence to do so
6. There are many Western women on Vit D/Calcium suppements. This problem is not limited to Muslim women."

I say – ban all Islamic garb unless it is in day-glo colours.

56 thoughts on “ISLAM AND SUNSHINE….”