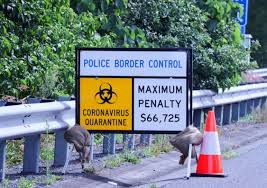 If you thought things couldn’t get any worse in this horrendous year of 2021, if you thought state-sponsored aggression/antagonism towards sovereign citizens ‘couldn’t possibly happen here,’ then recent events in Australia’s northern territory suggest otherwise. According to unconfirmed social media posts, in the past few days the territory’s aboriginal community has been subjected not only to removal from their homes to ‘quarantine camps’, but also forced vaccination. And this is not some banana republic. This is a commonwealth country . . .

Perpetually outraged by China’s similar treatment of the Uighurs, the western liberal media however stands by in silence to what some commentators are terming as potential crimes against humanity. if these allegations are true, and the Australian state is forcibly injecting citizens with the Covid ‘vaccine,’ then it is undoubtedly a human rights breach of the most profound nature. Even if the claim turns out to be unfounded, the forced removal of indigenous people to ‘camps’ appears to be happening.

It’s not only the western ‘liberal’ media whose silence speaks volumes. As yet there has not even been the whiff of a response – official or otherwise – from any branch of UK government. And where silence is assumed to equate to complicity, this is where things become truly sinister. For when it comes to condemning injustice or oppression of any sort Boris Johnson and co are not exactly backwards at coming forwards.

Only not in this instance. While terrified aboriginal citizens send out distress signals via social media, the same British government that needs absolutely no encouragement to condemn human rights violations from Afghanistan to Zimbabwe, chooses to look the other way. Why should that be? The answer to that question leads to a horrifying supposition: the violations have British government approval. Support which is tacit is support nonetheless.

Which leads to the horrifying possibility that events in Australia may be a test-bed, a trial run before similar violations are rolled out in western liberal democracies such as the UK. Consider what’s occurring in Austria and Germany. Meanwhile, footage from the Netherlands reveals citizens being viciously assaulted by black-clad riot police for the crime of being ‘unvaccinated.’

Surely, these brutal attacks on the citizenry could not happen here in the UK, that bastion of personal liberty and freedom – an assumption which poses quite a conundrum for the Johnson administration. There can be little doubt the UK government would like to adopt a similar stance to its commonwealth partners i.e. to wage outright war on dissenting (“unvaccinated”) citizens, but there’s a rather large fly in the ointment: this is England; things are done differently here.

After all, hasn’t the UK spent the past 50 years berating totalitarianism from the roof-tops? Has it not aided and abetted various US-instigated ‘regime changes’ – and all in the name of liberal democracy? If the UK is indeed the paragon of virtue it portrays itself to be, then worry not; it would be unthinkable for that same benign government to remove citizens from their homes into re-education camps a la Australia, to then forcibly inject an experimental vaccine into their unwilling bodies.

Maybe so, but be under no illusion: government indifference to such blatant violations does not bode well for the UK citizenry. Something is holding the Johnson government back from following suit and it’s not necessarily concerns over human rights violations. Remember this is the precisely the same government prepared to sack medical professionals who refuse to submit to its edicts. No, government hesitancy is of a more pragmatic nature.

Should Boris Johnson give the red-light to mandatory/forced vaccinations, that one decision – unwarranted and unprecedented in the history of the British Isles – would signal the instant, irretrievable death of western liberal democracy. In its place would be ushered in some form of technocratic authoritarianism aka rule by ‘experts.’ There would be no disguising it, no sugar-coating the horrific truth. Society as we know it would cease to be. And it would all be down to one man: Boris Johnson.

That’s quite a weight to carry upon shoulders as fickle as those of the current administration. Johnson and his cohorts are neither brave or noble. Who but a fool would risk infamy at the behest of entities who will remain in the shadows? For should Johnson cave in to the demands of the mainstream media as per his propensity, his and those of his ministers will be the names forever associated with the destruction of liberal democracy, not that of the BBC Director General or the CEO of Pfizer.

‘He who passively accepts evil,’ said Martin Luther King ‘is as much involved in it as he who helps to perpetrate it.’ Indeed, the silence of the Johnson administration in the face of suspected human rights violations is ominous. If the prime minister really is being held back by mere considerations of reputational damage or hypocrisy, then the UK is skating on very thin ice. In a mainstream media forever ‘urging’ lockdowns and more totalitarianism, Mr Johnson will no doubt discover an unexpected ally, one prepared to provide whatever cover is necessary. Besides, it’s the victors who always write the history books.

Perilously close to a totalitarian age in which Orwell’s vision of a boot stamping on a human face for perpetuity seems closer than ever, despite appearances liberty in the UK currently hangs by a thread.