Jennifer Lawrence is making no apologies about keeping naked pictures of herself on her computer. But the 24-year-old actress is hitting back at the hackers who stole the provocative shots in Vanity Fair‘s November issue. Jennifer spoke about the incident for the first time by calling the photo theft ‘a sex crime.’ ‘It is not a scandal. It is a sex crime,’ she told the publication. ‘It is a sexual violation. It’s disgusting. The law needs to be changed, and we need to change.’

Hang on a moment.  This is NOT a “sex crime”. Sensible people do not post naked pictures of themselves or store such “on the computer”. They REFRAIN from such stupid activity, Jennifer. So whilst you are a cutie pie, you are also one sandwich short of a picnic. If you don’t want naked images of yourself “leaked” best that you don’t take naked images of yourself and retain at least the appearance of some dignity? That said, she was good in X-Men as the feisty Mystique! 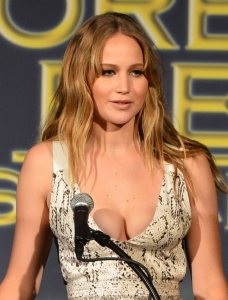