Israel sent Ahmaed Jaabari, the Hamas chief warlord/terrorist/gangster/freedom fighter, off to meet his virgins with a missile strike on his motor in Gaza. 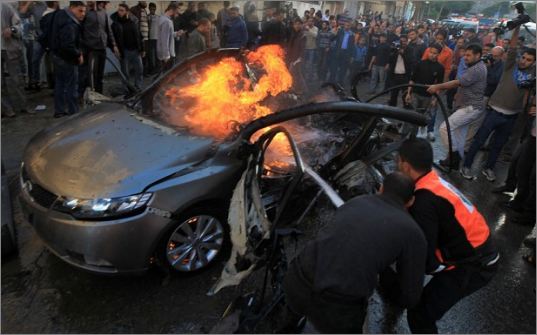 I know, it’s a tit-for-tat act which doesn’t bring peace any closer. Then again, Hamas has attacked Israel many times with rockets in the last few weeks, including 100 on 11th November. If that happened against my country I’d expect HM Armed Forces to have a say in the matter. Sky News has just quoted the Israeli government as saying that this is “just the beginning” of continued action against Hamas. Time will tell if this is so and if it’s a precursor to action against Iran. If things get hot with Tehran then Israel really doesn’t want Hamas (and Hezbollah to the north) joining in the fun.