Like many others, I was outraged by this judicial decision.

Labour peer Lord Janner will not face child sex abuse charges because the severity of his dementia makes him unfit to stand trial, the Crown Prosecution Service (CPS) has said. The abuse allegations relate to residents in Leicestershire children’s homes between 1970 and the 1980s. Police condemned the CPS decision as “wrong”, and the Labour Party has suspended the 86-year-old peer. Lord Janner “is entirely innocent of any wrongdoing”, his family has said. A retired High Court judge will now review the CPS’s handling of the case.

I thought this image made a sharp point… 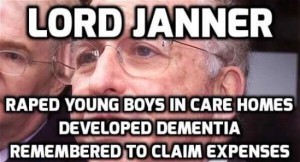