Once again, the BBC allows itself to be used as a mouthpiece by alleged terrorists;

Prison officers have reacted with fury to claims from Woolwich murder suspect Michael Adebolajo that he was ‘assaulted’ while in prison. The man accused of hacking to death Fusilier Lee Rigby in the street was involved in a violent incident in Belmarsh high security jail last week in which he lost two teeth. In an interview with BBC News over the weekend, Adebolajo’s brother Jeremiah claimed warders in the prison ‘took offence’ when the remand prisoner refused to obey an instruction and then ‘smashed his head against a window’. The BBC also reported the claim – denied by Prison Service officials – that the murder suspect had been denied medical treatment.  Officials insisted he had refused to be seen by a doctor. The report also claimed the suspension of five officers involved in the incident was ‘exceptional’, and hinted the assault might have been the result of Adebolajo’s ‘notoriety’.  But yesterday the prison officers’ union condemned reporting of the incident as a ‘circus’. And sources suggested the officers had felt threatened after Adebolajo refused to comply with orders and turned towards them aggressively. 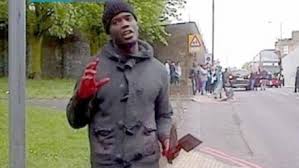 The BBC seems utterly determined to make us sympathise with Adebolajo in particular and Islam in general. Allowing itself to be used as a vehicle to impugn the reputation of the Prison officers concerned seems so natural a thing for the BBC to do.