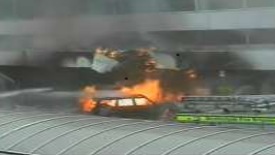 Wonder what you make of the claims that severly burned Glasgow Airport attack suspect Kafeel Ahmed is being kept alive on the orders of MI5? The alleged Jihadist has third degree burns to 90% of his body and virtually no chance of surviving but insiders claim the security services are keeping him alive to avoid a backlash from radical Muslims.

I would switch the machine of right now and stop wasting British taxpayers money keeping Jihad scum alive. And as for the backlash from "radical Muslims", let us recall that the attack on Glasgow Airport was BY radical Muslims.  It was radical Muslims who planned to bring mass carnage to Scotland. It is they who should be afraid of us, not the other way around.