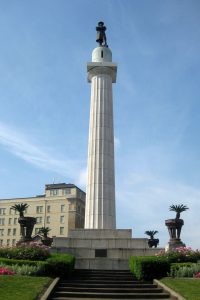 Some years back, I visited New Orleans for the first time. As I am wont to do in any new city, I took a walk.

About a mile south of the tourist area, I ran into this statue of Robert E Lee, on this huge pedestal. I couldn’t believe that such a thing could exist, still, but there it was, buddy.

This statue in Lee Circle, New Orleans, came to be in 1884, not that long after the end of the Civil War. It was taken down in 2015, and is now in an unknown location.

Five years after the New Orleans statue was whisked away, another statue of the General was removed from the US Capitol building. It happened last night. The removal was recommended by a committee established by the Virginia legislature, with the full approval of the state’s governor. It is likely that Lee’s statue will be replaced by one of civil rights activist Barbara Johns.

This Lee monument stood in the Capitol since 1909.

This statue removal, which came about after a thoughtful and lawful process, means so much more than the destruction of statues by mobs that we have seen.

68 thoughts on “Robert E Lee Statues Are No More”