Healing The Sick Is For Next Week

No Wonder the Stock Market is Jittery

What with the $800 billion dollar spending bill, and the ongoing multi-billion dollar bail-out for the banking and insurance sectors of the American economy, it is a pleasing thing to note that the first sounds of ‘fiscal responsibility’ are creeping out from underneath the White House’s floorboards and cellars. 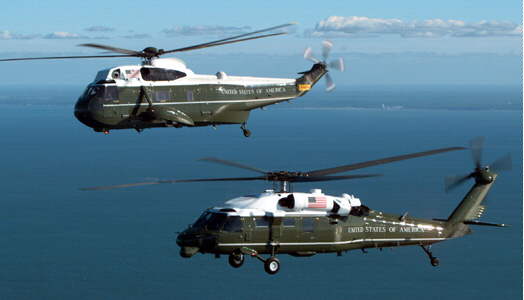 In  a resounding shot across the bows of the rampant military construction corporations and their Pentagon bedfellows, President Obama has sent out signals that maybe he just doesn’t need a brand-new helicopter fleet to replace the old Sikorsky workhorses which have transported the Presidential cavalcade to and from Andrews Airforce base, Camp David and other scenic picnic sites.

The VH-71 program, commenced under the Bush Presidency, is a prime example, according to insiders, of how not to run a military procurement programme. the aircraft itself weighs too much for the engines to safely lift it and it’s precious cargo, partly because of all the bolt- and add-ons required by the Security Office and the Secret Service after the first design sheets were initialled. As we in Great Britain know only too well, if you try and change the flying parameters, controls and engine functions after the original design has been signed off, you get an eight-helicopter fleet which has remained grounded after delivery, because the pilots cannot rely on the electronic ‘whotsits’ to safely fly the monsters in anything other than perfectly clear flying conditions. All this at a cost of £500 million, and the fleet won’t work until 2010!

At least Obama has the balls to shout ‘stop’ when he sees something going badly wrong. Maybe, just maybe, when he fights his way out of the spending spree and all the banking boondoggles, he might turn into something close to his promises. Still don’t like him, don’t like many of his policies, certainly don’t like some of the people who crowded around during the election, but he might come through as something special for America. Hope he doesn’t do a ‘Tony’ on us, but maybe he won’t!