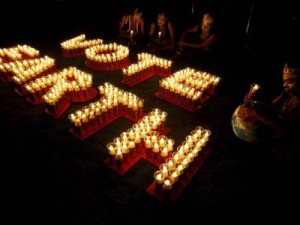 As some may know, last Saturday was the annual “Earth Hour” comedy, so beloved of the anti-civilisation left aka ecoloons. I was amused by this dissection of their folly!

Consider the activists’ recommendation of replacing electric lights with candles for an hour. Candles are made from paraffin, i.e., refined crude oil, and are far less efficient than electric bulbs — even those dastardly incandescent light bulbs our government is so helpfully seizing from us. You would need about 40 candles to match the light produced by a 40-watt bulb, but just one candle cancels out any theoretical CO2 reduction.

Then there’s the effect of a mass off-switch/on-switch across an electrical grid. Power companies still pump the same amount of energy despite a brief dip in consumption. But when a large number of people simultaneously increase consumption at the end of Earth Hour, a surge often requires engineers to fire up additional coal or oil-fueled resources.

And liberals claim that conservatives are anti-science!

How many Polar bears have to die before the watermelon contingent are dismissed for the cranks they so clearly are?

5 thoughts on “LIGHTS OUT FOR THE LIGHTS OUT BRIGADE!”