So many people doubt that the U.S. sits on the largest Oil Reserves in the world. Well one of the people who doesn’t doubt it, and understands that it will be developed is Prince Alwaleed bin Talal. He went nuts the other day on the rest of his Royal Family that they need to diversify the Saudi Economy because the fracking and Shale Oil extraction that is about to erupt in the U.S. will destroy their economy. 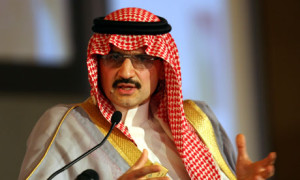 Prince Alwaleed bin Talal, the billionaire Saudi Arabian investor, has warned that his country’s oil-dependent economy is increasingly vulnerable to competition from the US shale revolution, setting him at odds with his country’s oil ministry and Opec officials.

“Our country is facing continuous threat because of its almost total dependency on oil,” he wrote in the letter, copied to King Abdullah, Prince Alwaleed’s uncle, among others.

Opec officials have sought to play down the threat posed to the kingdom from surging North American oil production, which saw US imports from Opec members tumble to a 15-year low last year.

“The world is increasingly less dependent on oil from Opec countries including the kingdom,” Prince Alwaleed wrote.

Speaking in Washington in April, Mr Naimi, who has been the country’s oil minister for almost 20 years, welcomed increased American output as a stabilising influence on global oil prices.

He also pointed out that Saudi crude exports to the US actually increased in 2012. That is largely because US refiners have not been able to replace the kingdom’s heavy and sour crude oil.

But Prince Alwaleed rejected Mr Naimi’s assessment, although he focused on rising US gas output rather than the country’s crude oil production, which saw its single largest annual increase ever last year.

“We disagree with your excellency on what you said and we see that raising North American shale gas production is an inevitable threat,” Prince Alwaleed said.

23 thoughts on “Made me laugh”