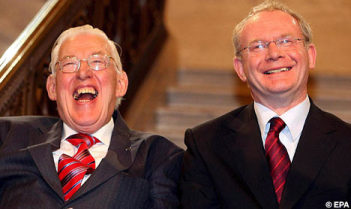 Jenny McCartney, youngest daughter of my old political colleage Bob McCartney, hits the button on the head when she says in the Sunday Telegraph…

"Paisley, as some commentators have noted with rather naive gratitude, has withheld from rounding upon Sinn Fein with his usual gusto over the Quinn case. That is because the DUP and Sinn Fein, once locked together in mutual loathing, are now squeezed in the close embrace of an unopposed government. They are all enjoying vigorously working the levers of power, and the DUP is perfectly aware that if Sinn Fein should come crashing out of government, it will too.

"The DUP may even be hoping that if it goes gently on Sinn Fein with regard to the Quinn killing, perhaps Sinn Fein will tread lightly on its own little scandal: the rather touchy subject of why the DUP environment minister, Arlene Foster, recently announced herself "of a mind" to award a highly unusual private contract for developing a visitors’ site on the Giant’s Causeway – the nearest thing Northern Ireland has to a national monument – to a fellow DUP member, Seymour Sweeney. When Paisley’s son, Ian Paisley Junior (known to local wags as Baby Doc) was asked if he knew Mr Sweeney, he replied hazily: "I know of him," as though of some distant potentate. It turned out that Mr Sweeney was not only a close friend but had sold him a house.

This month we have had a glimpse of the new Northern Ireland: a place of gleaming tourist centres and political cronyism, rocketing house prices and squalid murders, where victims emigrate and killers get promotion. The politicians will not pursue the death of Paul Quinn, but the people must demand justice for him, if they care enough about what their state is to become. If they do not, one other fragment from the newspapers last week whispered the future: an 18-year-old man was beaten with baseball bats by a masked gang in Newry. Police have confirmed that a possible paramilitary link is one of a number of lines of inquiry."

4 thoughts on “McCARTNEY ON THE BUTTON!”