THE END OF IRAQI WAR DAYS..

Many of you might already know Michael Yon by his widely publicized, hugely popular photographs from the war front. 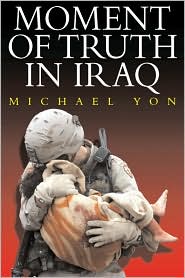 A former US Green Beret, Yon has been working as an embed journalist since December 2004. He works freelance and has been embedded with both American and British troops. He writes what he sees and  this book, Moment of Truth in Iraq,  provides one of the most complete, interesting, and even-handed accounts I personally have ever read.

As an embed, Yon witnessed mistakes committed during the early years of the war, and  recently, witnessed the precarious “second chance” being played out by General Petreaus and his troops. Yon writes of the guerrilla warfare, in progress as you read this book review.  This book documents the actions of our soldiers as they carve out a precarious victory.

Yon has a captivating writing style.  But don’t believe me; judge for yourself. Here is an excerpt from his book from a section describing his embed with British troops:

The British soldiers had been out longer than thirteen hours and the heat was stifling. Ambient temperature was now 115 F outside the vehicles, and temperatures approached 70 C (around 150F) inside. Soldiers poured water down their body armor.  The driver was naked other than his body armor and helmet, while soldiers in the back literally pulled down their pants. This was more than an attempt at comfort; they were trying not to die. Thick clouds of thick dust baked the putrid Basra odors until they could gag a goat, although by then the soldiers inside the Bulldogs and Warriors could have offered serious competition in a stink contest. With their heavy body armor and helmets, and laden with ammunition, rashes erupted on their skin. Their goggles and ballistic glasses were filthy. The place was like a toilet used as an oven. The people on the septic streets were flushed with hostility.

8 thoughts on “Moment of Truth in Iraq”