Ever thought of not having a baby instead?

We’re tired of lies we want the truth!

Climate Change: A Senate minority report lists 400 reputable scientists who think the only melting ice we should really fear was in the cocktail glasses of attendees at the recent global warming conference in Bali.

In the wake of the Dec. 3-14 conference, where delegates worked to draft a successor to the failed Kyoto Protocol on global warming, Sen. James Inhofe, R-Okla., ranking member on the Senate Environment and Public Works Committee, has released a report that lists scientists who challenge both Al Gore’s assertion that the debate is over and the Bali conclusion that the planet is in imminent danger.

Many of the 400 scientists have taken part in the U.N.’s Intergovernmental Panel on Climate Change, whose climate change reports tout consensus but which critics charge are heavily edited to support pre-defined conclusions.

“I find the Doomsday picture Al Gore is painting — a six-meter sea level rise, 15 times the IPCC number — entirely without merit,” he said. “I protest vigorously the idea that the climate reacts like a home heating system to a changed setting of the thermostat: Just turn the dial, and the desired temperature will soon be reached.”

Physicist John W. Brosnahan, who develops remote-sensing tools for clients like the National Oceanic and Atmospheric Administration, says: “Of course I believe in global warming, and in global cooling — all part of the natural climate changes that the Earth has experienced for billions of years, caused primarily by cyclical variations in solar output.”

Brosnahan says he has “not seen any sort of definitive, scientific link to man-made carbon dioxide as the root cause of global warming, only incomplete computer models that suggest that this might be the case.” Those models, he says, leave out too many variables.

Indeed, a study in the Royal Meteorological Society’s International Journal of Climatology looked at 22 computer models used by the IPCC. Most of the models couldn’t even predict the past.

Predictably, after a quick review of the report, Gore spokeswoman Kalee Kreider said 25 to 30 of the scientists may have received funding from Exxon Mobil (NYSE:XOM), though she didn’t name which scientists she thinks were bribed to distort the truth. Wise move.

This is not like Al Gore getting 75 hours of free airtime on NBC, a unit of General Electric (NYSE:GE) , which stands to make wads of cash on things like solar panels and wind turbines. Or Gore being involved with a company that sells carbon offsets.

Heartland Institute senior fellow James Taylor has noted that more than 600 scientists at the Bali gathering could have debunked Gore’s warming theories, but the U.N. “censored” them.

By the way, Gore and his statist friends in Europe repeatedly have criticized the U.S. for its “failure to act” on warming. But new data show the U.S. in 2006 slashed output of greenhouse gases by 1.3%, while Europe’s output continued to grow. So who’s failing to act?

Here an idea: How about NBC hosting 75 hours of debate between some of Inhofe’s 400 scientists and any one of Gore’s choosing, including himself? Afraid of some inconvenient truths, Al? 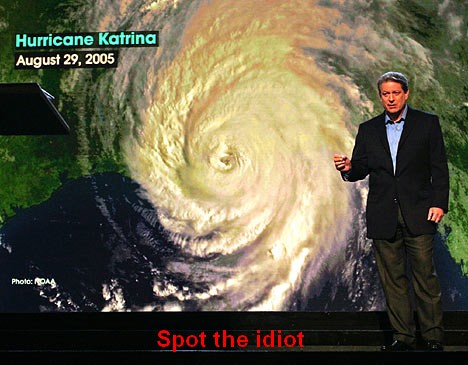