You can picture the scene, it’s been done many times: Cameron or Hague over here, Obama or H. Clinton over there step up to the mic to tell us why Afghanistan is necessary, that we are there to build up the country, to ensure long-term security by training and equipping Afghans to take responsibility for their own country.

Journalist Ben Anderson has been embedded with a US Marine unit attempting to do exactly that in Helmand and has made a film about it: “This Is What Winning Looks Like”. (Many thanks to ATW regular Daphne for bringing it to my attention.) I urge anyone with an interest in Afghanistan to watch it. It became obvious a long time ago that it was a lost cause, and that it would descend into chaos the moment we left. Well the chaos never left.

He filmed in and around Afghan police bases in Helmand. Except they’re little more than local criminal enteprises, where young boys are raped by the police every night, corruption is so rampant that Kabul will not supply materials and most of the police are out of their minds on drugs. All this in full view of the Marines. When senior American and British diplomats visit from Kabul we see that they’re told a pack of lies, lies which get fed up the chain and come out into microphones when politicians tell us what wonderful work our forces are doing there.

The truth is our forces are completely irrelevent to Afghanistan. You have to see it to believe it. If you cannot view now, bookmark it for later. Below the fold (because of the language) is a screengrab with subtitles of a police commander’s reply to the Marines senior officer when told that his men must stop raping young boys. It’s that bad. 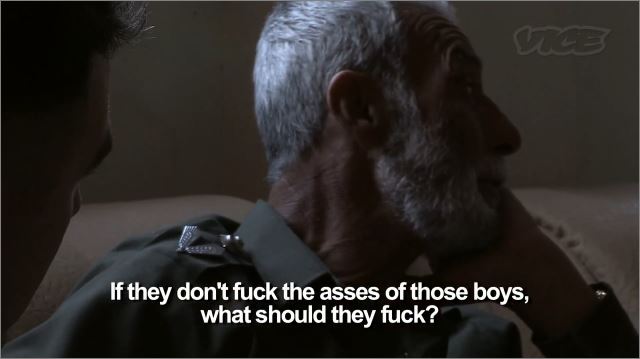 4 thoughts on “MUST WATCH: “THIS IS WHAT WINNING LOOKS LIKE””