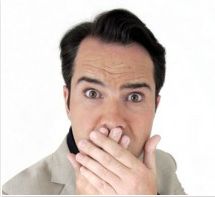 Laughing all the way to the Jersey bank.

My sincere congratulations to right-on comedian Jimmy Carr. Despite being a very high earner he’s managed to keep almost all of it, losing just one per cent of his income last year to the rapacious state.

Despite this righteous and moral act, he was still heckled last night at a gig after the news broke. I suppose it’s understandable given the towering hypocrisy on show. It turns out that some of that income was earned doing the kind of skit on Channel 4 which berated Barclays for a “tax scam” which allowed it for paying … well, just one per cent in tax.

Still, angels rejoice over one sinner repenting and all that, and I welcome Jimmy Carr’s conversion in the pro-society, anti-state battle.

14 thoughts on “NICE ONE JIMMY”