THE RABBLE IN THE CLASSROOMS… 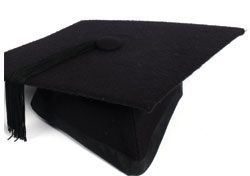 Interesting to find that many Undergraduates fear that the Government’s drive to get half of young people into university will make degrees worthless and leave them struggling to get a good job after graduation, according to an official report revealed yesterday.

This shows how bright these young people are – seeing through the politicians spin and bluster!

Students, who on average now graduate owing £21,500, believe that they will be forced to take on more debt to study for a postgraduate qualification to make them stand out in the jobs market. The findings should make disturbing reading for ministers who have pledged to have 50 per cent of young people studying for a degree by 2010. John Denham, the Universities Secretary, has insisted the target will be stuck to despite conceding that the Government is now unlikely to reach it. (There’s logic for you!)

If you follow the link you will find government ministers claiming that the average graduate earns £100k across a working lifetime more than someone without such a qualification. Nonsense. That MAY have been true when graduates were fewer and well educated so worthy of a salary premium but NOT any more!

The awful truth is that many graduates are now stacking shelves in supermarkets, answering phones in call centres, doing the most manual and underpaid of jobs. Why? Supply and demand. Left wingers struggle with this concept, you know. This whole government inspired fantasy that the UK needs 50% of its young people coming out with a degree, no matter how worthless, is a grotesque con job. It betrays young people, destroys the value of a university degree, and distorts the job market.

All in a days work for our wicked socialist masters. I bet they are happy with the chaos they cause.

One thought on “NOT WORTH THE PAPER IT IS WRITTEN UPON….”