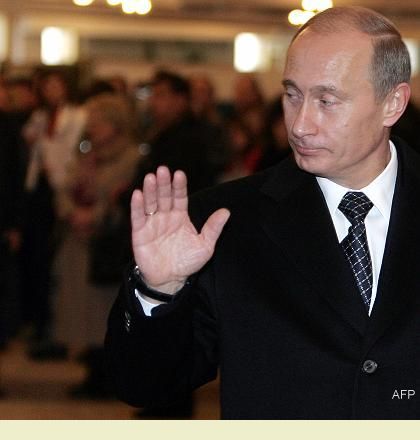 ‘The West Must Distance Itself from Putin’s Swindle’

The European press reacted on Monday to Vladimir Putin’s landslide victory with a mix of criticism and, in a few instances, praise. But most papers agree that the power struggle within the Kremlin is only just beginning.

“As expected, Russian President Vladimir Putin garnered an overwhelming election victory. Even before (his victory), he claimed he would be given the ‘moral right’ to continue to determine his country’s political course. … After his victory he spoke of a festive atmosphere. But it has an ugly downside. Neither the campaign nor the election was deserving of this description. It was the most unfair election since the fall of communism. The state abused its power in the media. Opposition voices were suppressed. … If the West doesn’t strongly distance itself from this historic election manipulation, which one could at best describe as a swindle, it will muddy our own democracies. And we would also be abandoning Russians who haven’t yet buried their hopes for democracy in their country.”

“In his years in office, Russian President Vladimir Putin has succeeded in resurrecting the myth of Russian power that stems from an era before the Russian Revolution and the Soviet Union. The Russians felt the need for this resurrection as a way of forgetting the humiliations that came along with the collapse of the Soviet empire and the tumultuous years under Boris Yeltsin. Vladimir Putin is the man who revived it.”

“To some extent, it remains astonishing how nervously and aggressively Putin and his army of propagandists have reacted to every form of criticism or opposition to the Kremlin.

Nothing astonishing about it mein Herr. Paranoid people have enemies to, ya know!

No one seriously questions the fact that the economic boom that has happened during Putin’s terms has made him even more popular. And he and his vehicle of power, the United Russia party, likely could have gained a solid lead in the Duma election wiithout having to resort to methods that included the application of massive pressure and manipulation in the run-up to the election.”

“It appears that potentates like Putin — with their pronounced autocratic tendencies, a tradition that is deeply rooted in Russian history — are incapable of trusting the democratic persuasiveness of their arguments and in some respects their formidable achievements. The old Lenin saying that “trust is good, but control is better,” seemed to be the central vision of the man pulling the strings inside the Kremlin during this election.”

“Vladimir Putin can book an election triumph, based on true endorsement, but it is also the result of excessively deployed authority. And that’s why the true battle for power is just beginning in Russia. After all, it was precisely this Kremlin chief who turned Sunday’s election into the first round of the Russia presidential election in March 2008, knowing full well that he would soon have to change offices. A plebiscite mandate was supposed to guarantee his ‘moral right‘ to remain Russia’s leader, even if he is in an office other than the presidency. To that end, the Russians have pushed aside allegations of election manipulation and have instead given their approval to Putin.”

“Will the Kremlin chief’s words be followed by corresponding actions after he leaves the office of president? If he decides to continue to exercise his enormous remaining influence through the United Russia party (with its inevitable majority in the newly elected parliament), we will see if he is serious about what he has been saying. But if he allows himself to be named prime minister after leaving the office of president, circumventing the constitution, we will know that, in truth, he is merely seeking personal power.

A weakening of the office of the president in Russia, the only institution that is vested with political legitimacy, will lead the country on a path to chaos. The practice of changing the playing rules in order to retain power will also remain after the all-powerful man leaves the political stage, but the superficial stability of his leadership will not.”

“There is little doubt that the Russian president will interpret this result as a vote of confidence — and that it also justifies his desire to remain in power. If he is no longer able to remain president in spring, then another function will be found for him — be it prime minister, head of parliament or in the role of a ‘national leader’. But Putin’s victory is a false one. The allegations of manipulation brought by the opposition are a dark shadow hanging heavy over the election result. Still, Putin has no reason to fear any Ukranian-style Orange Revolution. At the same time, he shouldn’t feel overly secure, because a government that has to gain a victory through undemocratic means, is not as firmly in the saddle as the election result might lead one to believe.”

“Russian and Western election observers were unable to hide their shock on Sunday over the absolute pressure imposed on the vote in the giant country by the Putin administration. … It was exercised regularly and transparently enough that one could say that Putin held true to his promise of honesty. It’s not his problem that other people imagined a different outcome — probably like the European leaders who live in a complete fantasy world with their dream of drawing Russian natural gas without Putin’s political policies also flowing through the pipes.”

Funny how a newspaper in a former Soviet slave-state understands what Gazprom – Vladimir Paranoid’s ambassador to Europe – is all about.

“Elections and free-market economies are viewed as a symbol of recovery, and Vladimir Putin’s iron hand as a necessary phase during the transition from post-communist chaos to a liberal democracy. But Russia has destroyed a number of myths about democracy and confirmed the failure of the recipes and frameworks that the West has applied to transition countries. … Russia’s economic strength, which has in no way buttressed democratic transformation, has instead empowered Moscow’s oppressive regime. In Russia, the traditional authoritarian model has been restored using the tools of capitalism, and the Russians appear to be contented with that.”

The State Department’s Russian expert was unavailable for comment.