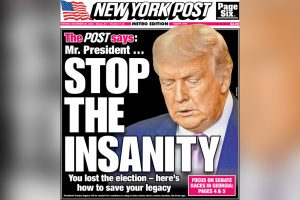 No print media has been more supportive of Donald Trump over time than the NY Post. They’ve been close allies since the 1970s, before Trump entered politics, before Trump Tower was built, before he opened his first casino in Atlantic City.

Trump has probably been the subject of hundreds of front page Post headlines, Page Six exclusives, half of them planted, nearly all of them positive.

This morning, on the front page, the NY Post gave Trump the Dutch Uncle talk that his fake friends and fake followers didn’t have the character to tell him. They told him that he lost, and that he should man up and concede, and quit playing this game.

It took them a month and a half to say it, but they said it.

The longer it takes Trump to concede, the more it hurts the country, the Republican Party, and any hope for national conservative causes.

Rupert Murdoch is a friend of Trump, but he also knows how to count. Something that the dead-enders don’t know how to do.

173 thoughts on “NY Post to Trump : Stop Making a Fool of Yourself”