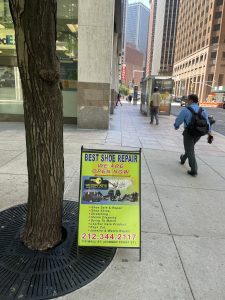 As of the other day, 70% of New Yorkers have received the at least one vaccine shot.
Governor Mario will be setting off fireworks tonight.

It’s been a long, long year plus.

But things have been looking up for some time.

As of late April, NYC subway ridership has been above 2 million during the week.

Restaurants reopened at full capacity on May 19.

Offices have been allowed to re-open for a long time.

Domestic tourists have started to return to Manhattan.

But we’re not out of the woods. There won’t be a return to normal until most white collar workers return to the office. And that hasn’t happened. Many employers are allowing workers to keep working from home for the time being, and a lot of workers are choosing to do that. They don’t want to come back to the office now, especially if that means a return to 90 minute commutes. Formal office re-openings are for many companies won’t be until September.

A number of employers are allowing first wave employees to come in on a voluntary basis. I am part of a relatively few that are doing that now. I choose to come in two or three days a week. I like the return to some sort of normal structure. I think that I get more done in an office than at home. And I enjoy being in the city, and enjoy giving some business to the long suffering delis and restaurants.

It’s sad to see so many long standing small and not so small restaurants and bars closed ; I’m amazed how some have survived this far.

These are not normal times, especially in the Wall Street area. But things have improved bit by bit every week.

July should see the return of much more domestic tourism, including a welcome flood from the nearby states. Foreign travel is still dicey, so come see America first.

In September, Broadway’s back.

Keep your fingers crossed, I believe that it gets better from here.

12 thoughts on “NYC is Looking Up”