Things must be getting in bad in Donetsk if even the NYT has noticed the crimes of the Kiev regime. Well they’ve long been bad and they still are in truth. Civilians are still being targeted and murdered despite a supposed ceasefire.  Maybe it was Kiev shelling an international press conference, while the cameras were rolling, which woke up the NYT. Who knows, but at least one major Western court stenographer has broken the omerta and is reporting what Kiev is doing. Reports the NYT:

The Ukrainian Army appears to have fired cluster munitions on several occasions into the heart of Donetsk, unleashing a weapon banned in much of the world into a rebel-held city with a peacetime population of more than one million, according to physical evidence and interviews with witnesses and victims.

Sites where rockets fell in the city on Oct. 2 and Oct. 5 showed clear signs that cluster munitions had been fired from the direction of army-held territory, where misfired artillery rockets still containing cluster bomblets were found by villagers in farm fields.

The two attacks wounded at least six people and killed a Swiss employee of the International Red Cross based in Donetsk.

Gosh, just wait till Washington hears about this. No doubt the criminal Poroshenko regime will rue the day it blasted civilians with cluster bombs. Or maybe not – 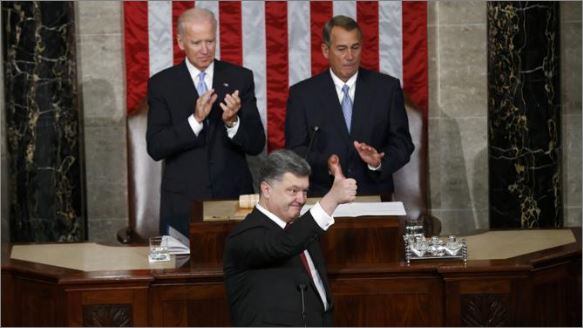 26 thoughts on “OUR FRIENDS THE UKRAINIANS”