One of Sinn Fein’s most senior leadership figures began importing guns to Northern Ireland after the IRA ceasefires and allegedly boasted that one of the weapons was used to murder two policemen, a BBC investigation has revealed. Sean ‘Spike’ Murray, at one time a key figure in the IRA, is now so trusted by the Sinn Fein leadership that just months ago he was one of the party’s negotiators in the Haass talks which considered ‘dealing with the past’.

Yet a Florida gunrunner last night revealed extraordinary detail about how in 1995 Murray allegedly asked him to start sending weapons to the IRA; a process which only ended in 1999 after accomplices were caught and after about 400 guns had been sent to the Province.

So, to recap, a TRUSTED Sinn Fein “negotiator” on “dealing with the past” allegedly imported weapons AFTER the ceasefire and boasted how they were used to murder two Police officers in my local town, Lurgan. Another pesky detail? Securicrat dirty tricks? Meanwhile…here’s Marty….and look how cuddly and nice he is.  Try and forget about RUC officers shot in the back care of HIS IRA. Repeat after me …peace, perfect peace. 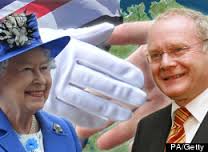