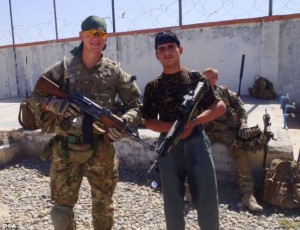 An unwitting British soldier who posed for a photograph with a rogue Afghan policeman was shot dead by him seconds later. Corporal Brent McCarthy, 25, is pictured with a member of the Afghan Uniformed Police just moments before the shooting. After the snap was taken the gunman and another accomplice turned their weapons on the RAF policeman.

Another murdered British soldier at the hands of the scum that infest Afghanistan. How tragic and what a waste. WHY are we still in this hell hole? I note the silence from President Karzai and his corruptocrat administration.
Click to rate this post!
[Total: 0 Average: 0]
Afghanistan

29 thoughts on “PICTURE THIS…”